Now I'm going to post about how actual Crebeau stores did business.

I've shown how expensive the products were, and wrote about brief history of Crebeau. From those information, it is not hard to determine that there was no way for most people to buy expensive cosmetics products from a company that was never heard of. Then who would buy the products? TVXQ fans, naturally.

We all know how devoted TVXQ fans are towards their artists, so they make perfect customers for the products. So here's how they sold the products.

This is a promotional event for the Crebeau-Jeff (Jaejoon's store). You get an autograph from the CEO of Jeff by drawing when you buy the cosmetics product before the end of event (June 9th, 2009) 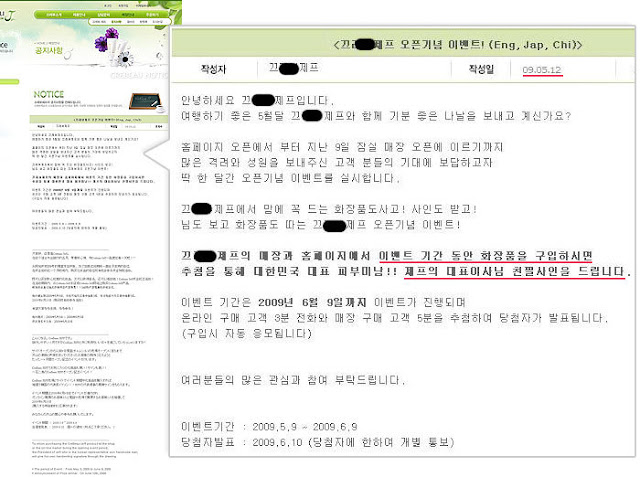 These pictures look like they came from Taiwanese fans. The pictures show the merchandises they received with the purchase. I'm sure they were happy to buy the products and getting those goods. I'm also sure they proudly left glaring reviews about the product on their blogs or forums. 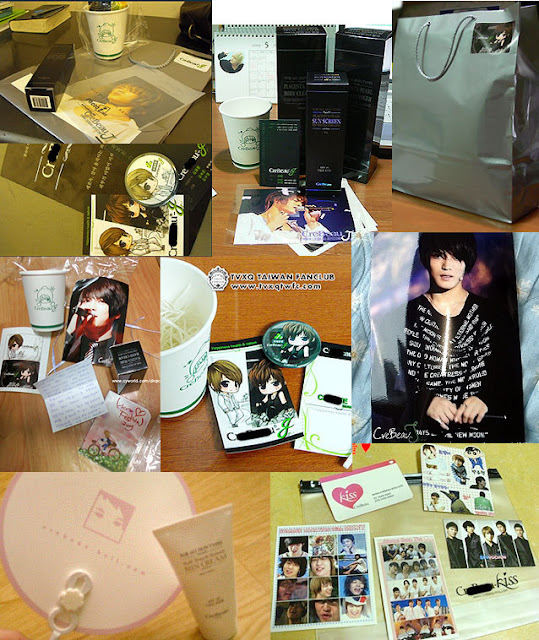 Basically, the products are sold by luring the fans with TVXQ merchandises, even with pictures including HoMin.
I'm sure some of the readers saw posts boasting about buying Crebeau products by fans from fan sites or personal blogs. Those fans usually post pictures of the extra merchandise they received and write raving reviews about the products prompting other fans to buy.
Next, this is how they did business with Japanese fans. Unlike Korean fans who are mostly young, there are more Japanese fans that are older, and that means more money to spend, and since TVXQ was huge in Japan, it was really easy for them to target Japanese fans to buy the cosmetics products. Following are some examples of Japanese promotion.

I don't know Japanese, so I'll just summarize what's written in Korean. Hotelinfo sounds like a travel agency, and it's offering a travel package for TVXQ's Beijing concert, and upon completion of reservation, you receive Crebeau products as 'Special Present'. On the bottom, there's an advertisement for Crebeau. Again, they used pictures of all 5 members.

Mozart tour package. The tour is for 2 days/3 nights, and the tour includes visits to the city of Daegu, Pizza restaurant, Cosmetics store, and the Ice Cream shop (Yuchun's). I guess a die hard fan may actually like it. If you download the pictures on your computer, you should be able to read what's in Japanese. I increased the size of the picture, but it still loads up small.

Then here are some comments posted by Japanese fans in 2009 from an old 2ch.net thread. My translations are from Korean translation, so some meaning may have changed, but the overall translation should be ok. I tried the google translator with the link, but it only translates the top portion of the page, so just find the comments with the post number, then copy and paste the text on the translator. I didn't spend too much time translating these, so they sound awkward, but you should understand what they say.
The comments are from this link.
http://unkar.jp/read/dubai.2ch.net/mendol/1247888189
235.
ジェジュンの化粧品って有害成分使ってるのに名古屋店とかオ?プンしてへいきなの？
ユチョンみたいに
20万以上買ったらユチョンのママと??取れるキャンペ?ンみたいなのやらないよね

Jaejoong's cosmetics use hazardous ingredients, but Nagoya store is opening?
I hope he doesn't run campaign like Yuchun, taking pictures with Yuchun's mother when you buy more than 200,000
237.
20万以上買ったら
そんなのあったの？
ユチョンには興味あってもママにはないぞｗ
when buying more than 200,000?
Yuchun yes, but not interested in his mother.

238.
化粧品?社の?員に告知されてた
有害成分と妊娠中の羊殺して採った胎盤の化粧品で金儲けなんて
日本では嫌われるだけだよね…
せっかく?れてきたのに
The cosmetics company's employee told me
they're making money using hazardous substances and placenta from killing pregnant sheep
going to be hated in Japan
just started to get popular
240.
有害成分入りの化粧品に20万以上使った特典が
オンマと??ってまた?わからん事を
オンマはオンマであってそれ以上でも以下でもないのに。
勘違いも程?にしてくれ
Paying over 200,000 for cosmetics made with hazardous ingredients
and you take pictures with Yuchun's mother? What is this?
Mother is just a mother, nothing more. Don't be nuts.


290.商?の仕方が果てしなく下品だし希望なさすぎる
化粧品屋の３人て自分の歌手としての才能に
自信ないのかな？
自分の才能もファンのことも全く信用してないような
行動してるように感じる
Selling method is really cheap. There's no hope.
Don't the 3 in the cosmetics business have confidence in their talent as singers?
Feels like they don't trust their abilities or the fans.

*  The following replies do not have a link to the original thread. I just copied them from a blog.
お父さんに車に?せられてお母さんの化粧品店に連れていかれるらしい
怖い
When a fan from Japan eats Pizza from Junsu's father's restaurant, he drives you to mother's cosmetics store. Scary.


926.
????屋行ったら火山????に???の化粧品屋行けとしつこく言われたお
さすがに引いた
Junsu's father was insisting on visiting the cosmetics store. Hated it.
927.
若い子は???されたって
金持ってそうな???限定みたいだよｗ
Young kids were ignored. Seemed like for only older woman who looks rich.

929.
その化粧品連行??あたしのマイミクだけかと思ったら、みんなされてるのね（爆）
でも、連れてかれた本人は「自分だけ」だと思ってよろこんで感動してたから、
そっとしとこ??。化粧品自?はよかったらしいけど。
Taking to cosmetics store, I though I was the only one (LOL)
But when I was going I was happy because I thought I was only one.
The product seemed good.
933.
ジュンスの家族に日本人から稼ごうと必死なんだね
も?おばさんはそれに引っかかって買っちゃうのか
金づるにされててむなしい??
韓?に行った事ない私にはジュンス親にかかわらないからいいが～買う日本人がいるのがやだな～
Junsu's family is trying hard to make money from Japanese.
Older women are stuck with it.
Only thought as source of money, it's a shame.
I've never been to Korea so it's good that I didn't have to deal with Junsu's parents, but hate it that there's a Japanese who purchased..

All for Japanese? Can't sell to Cassies because they're young and don't have money. Then Japanese? It's not right for the parents to push.
939.
親が出てくるとややこしくなるし、本人達のイメ?ジもダウンするよね

If parents get involved, it becomes complicated, and their images go down.
946.
ピザ屋まではいいけど、化粧品は自己責任でしょ。ジュンスの?親は何考えてるんだろ？
Pizza restaurant is ok, but cosmetics is his own responsibility. What are Junsu's parents thinking?

962.
ジュンスのサイン貰えるから先月ピザ屋に行ってきた
化粧品を?めるお父さんが必死すぎて悲しくなったよ
I went to the pizza restaurant last month because I was told I can get Junsu's autograph.
I was saddened because Junsu's father desperately pushed the cosmetics.
Pretty shocking, isn't it?

It sounds like the parents (especially one particular parent) were really pushing the Japanese fans to buy the cosmetics products whenever they visit Korea. When fans visited Junsu's father's pizza restaurant, he pushed the fans hard to buy the cosmetics, even personally driving the fans to the store. Then there's the ridiculous promotion of taking picture with Yuchun's mother when a fan purchases over 200,000 (probably Korean Won) worth of cosmetics. The worst part was that the Japanese fans (or non-fans) recognized that they were specifically targeted as customers because older Japanese women have more money than typical young fans. It's no wonder many Japanese fans stopped supporting CJS. A tour package that includes all the retailers CJS own? That's just too much.

It's quite embarrassing actually. So it's really not that hard to see that these people will pretty much do anything for money.
Posted by Precious at 11:21 PM


This moment always passes by, it's well known that it won' return

Day after day, do not leave regrets

Swallow even the fury born out of loneliness

Light kiss on the extended hand of the trials

My innocence blossoming in the garden of hardship

Nothing's been decided but a new day will continue every day